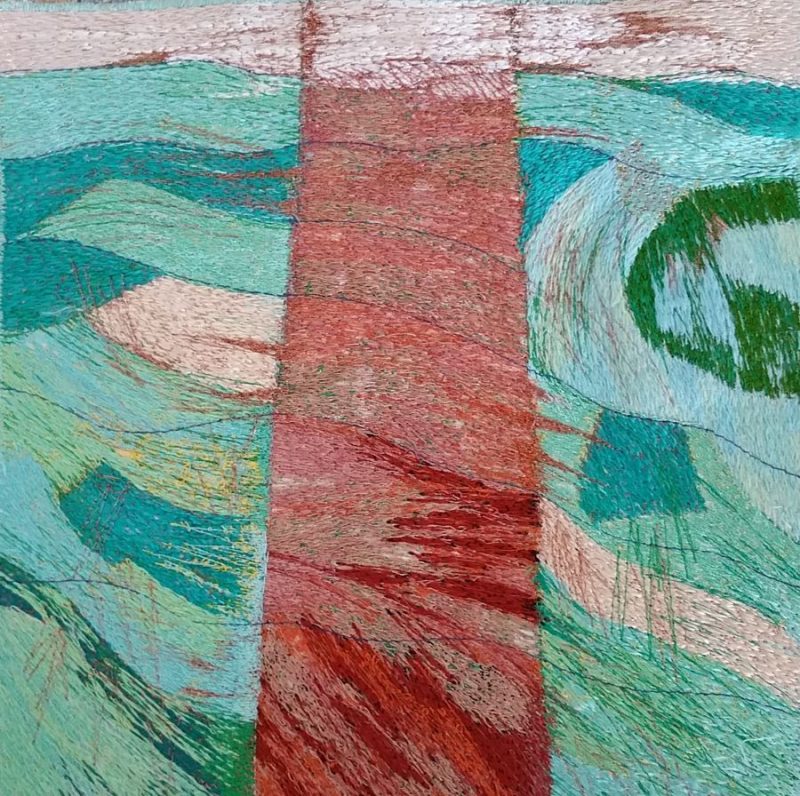 Carol Naylor was our inspiring speaker this month. Carol started by surprising us when she said that she was initially a ‘reluctant embroiderer’. She wanted to get into art college (Goldsmiths) to study painting, but was offered a place on the Goldsmiths embroidery course instead. People tried to talk her out of it. She accepted their misgivings (‘You can’t sew’, ‘You don’t like embroidery’) but she accepted the place, thinking that it would be ‘a foot in the door’ and that after a few weeks she would change to painting. Little did she know that embroidery would turn out to be a life-long passion. 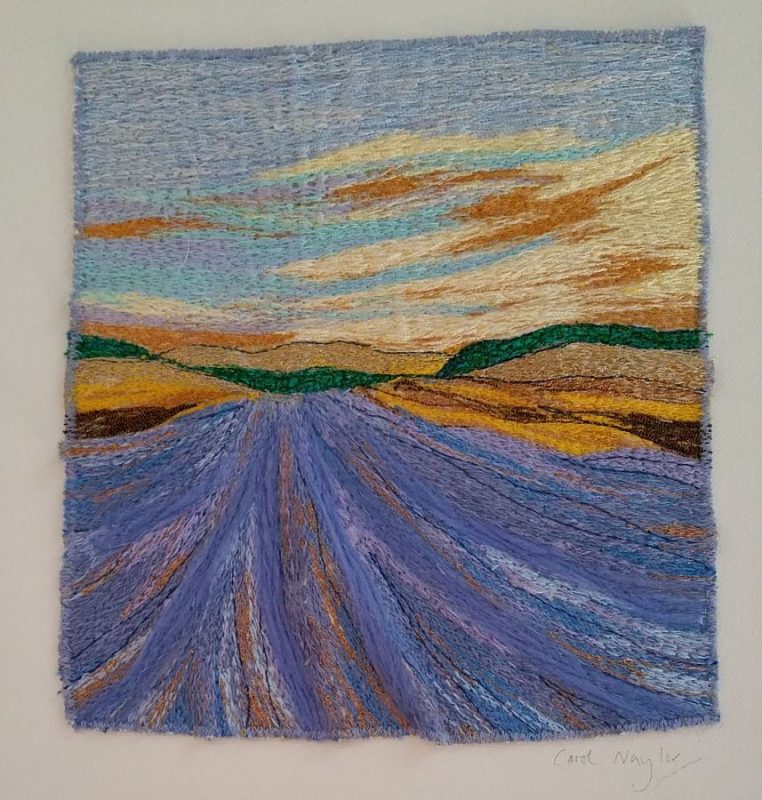 Somehow the change to painting never happened, and she found herself getting drawn into the world of stitch. Carol was lucky to be at Goldsmiths during the time when the legendary Constance Howard was teaching there. She spoke about her memories of Constance Howard’s green hair and her exacting standards. Carol struggled with embroidery for some time, but spoke about a breakthrough when Constance gave positive feedback on a small aspect of one of her pieces. 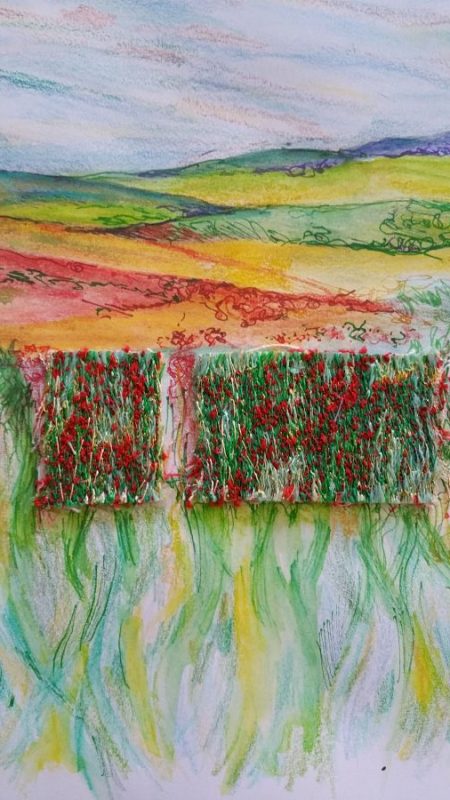 Carol’s interest in painting is self-evident in her work. From her post-graduate studies onwards, she developed her own style of ‘painting with the sewing machine’. She always creates from her own observations. She uses photos and sketchbooks as part of her preparation, but she finds it essential to have seen the subject directly. She brought sketchbooks for us to look at, and it was fascinating to see the development of a sketch, through stitch samples, and into a finished piece. 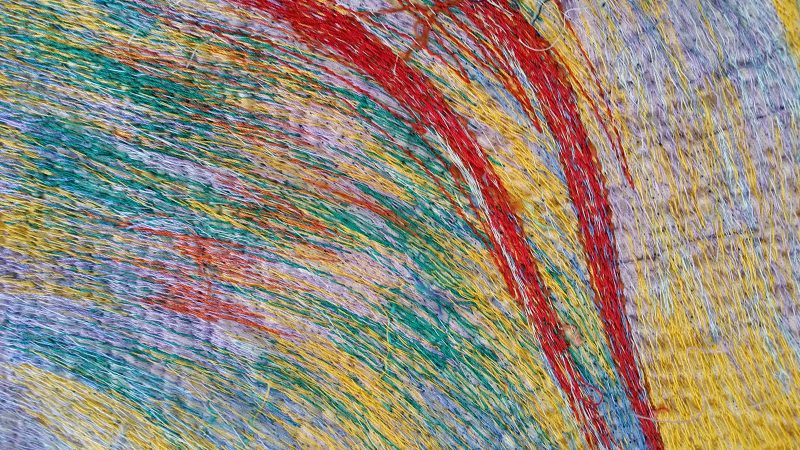 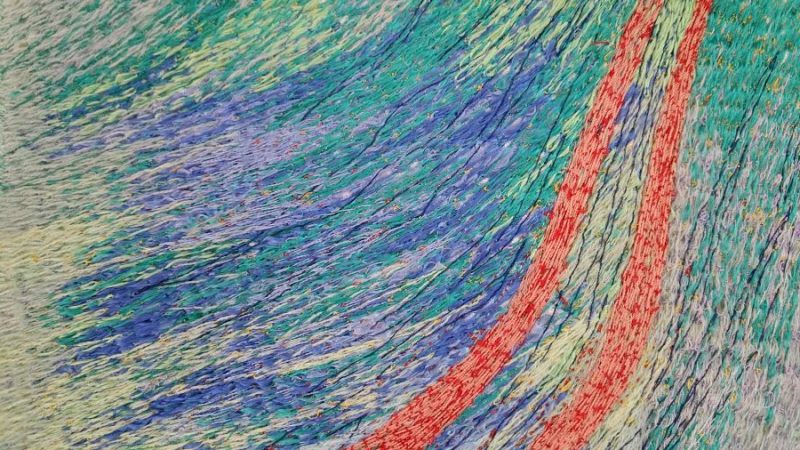 Carol works from the back of her work. The threads that she wants on the front of her work would be too thick to go through the needle, so she puts them in the bobbin and stitches ‘upside down’. The two photos above show the two sides of one of her pieces – interestingly, the back is also lovely! 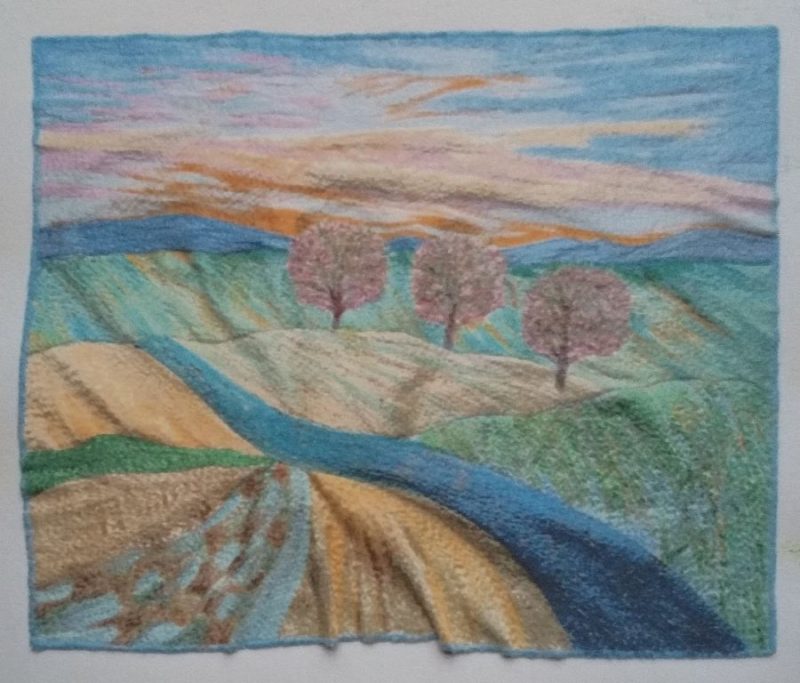 Carol ended up with a long-term career in textiles, becoming head of department at Chichester College for many years, interspersed with teaching Spanish. She eventually left the college to focus on her own work. She draws her inspiration from landscapes, with particular love of the South Downs, Italy and Spain.

She spoke about how she loves to inspire other people, and also how she loves to see the work of other artists. She showed us some examples of work by other people that she admires, and talked about how different artistic disciplines can influence and inspire each other. Carol is a Fellow of the Society of Designer Craftsmen and was chairman for four years. She has work exhibited in the current exhibition at the Bankside Gallery (open now, until 26th June). She will also has work in a forthcoming exhibition at the Oxmarket Gallery in Chichester, as part of the local art group ARTEL. Each member of the group has submitted art inspired by the Chichester Ship Canal. Good timing, as the exhibition is open from Tues 21st June to Sun 3rd July, so I for one plan to go along to see it. Details in the link. https://www.oxmarket.org/exhibitions/artel-2022

We had a wonderful talk this month by one of our own members, Julia Brown. Julia specialises in exquisite landscapes which she embroiders on her trusty 1970’s Bernina sewing machine. Julia comes from a family or tailors and sewers, and has stitched since childhood. She showed us a sweet tiny needlecase that she stitched as a young child, and spoke about how important it is to share our love of stitch with children and to pass our skills on. She also spoke about the importance of tutors, and she particularly acknowledged the influence of local machine-embroidery tutor Wendy Dolan. 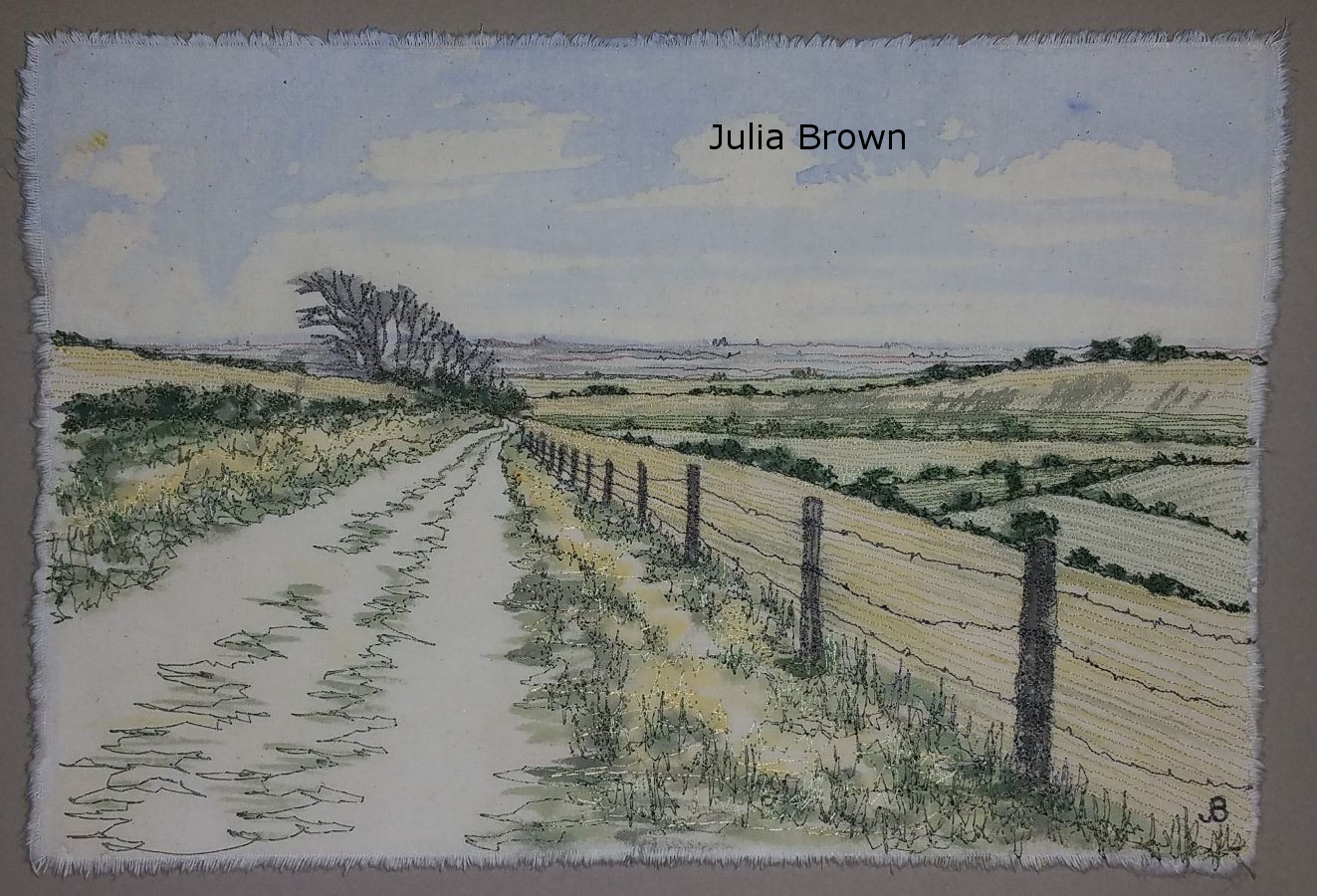 Julia has found her niche in machine-embroidered landscapes. It combines three key things that she loves: sewing, painting and landscapes. Sewing started in childhood, and for many years Julia has made and embroidered wedding dresses professionally. Her love of painting underlies her embroidery work (for example a knowledge of composition, colour mixing, where to put a focal point etc.). She lightly paints her fabric before stitching, leaving lots of space for stitching it afterwards. 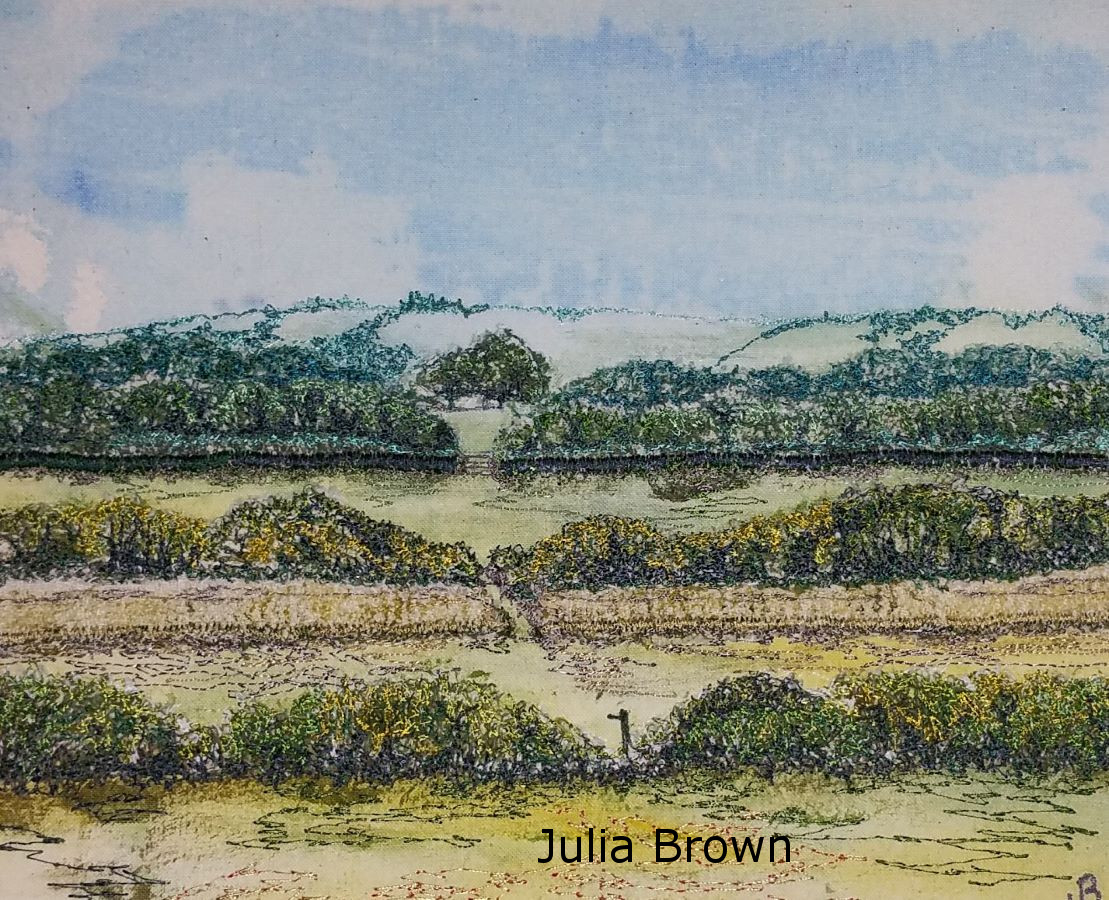 Julia studied Geography at University, and her love of landscape is what has led her to this particular aspect of stitching. She is interested in the underlying geology, as well as the human influence of things like tracks, hedges and fields. A recent influence is the wonderful book by Robert Macfarlane: ‘The Old Ways, A Journey on Foot’. This exploration of the ancient tracks and landscapes encourages the reader to slow down and really look at the world around them. It’s a lovely book, available from most good bookshops. 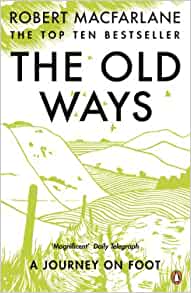 Julia showed us how she builds up layers of different textures before starting to stitch, using fabrics such as crepe bandage, scrim, dish-cloth etc. She then adds even more texture and detail with stitch. Many thanks to Julia for a very interesting talk, and for showing us your lovely work. To see more of Julia’s work, go to her website or FB page: https://www.facebook.com/JuliaBrownStitched/    https://www.facebook.com/JuliaBrownStitched/ 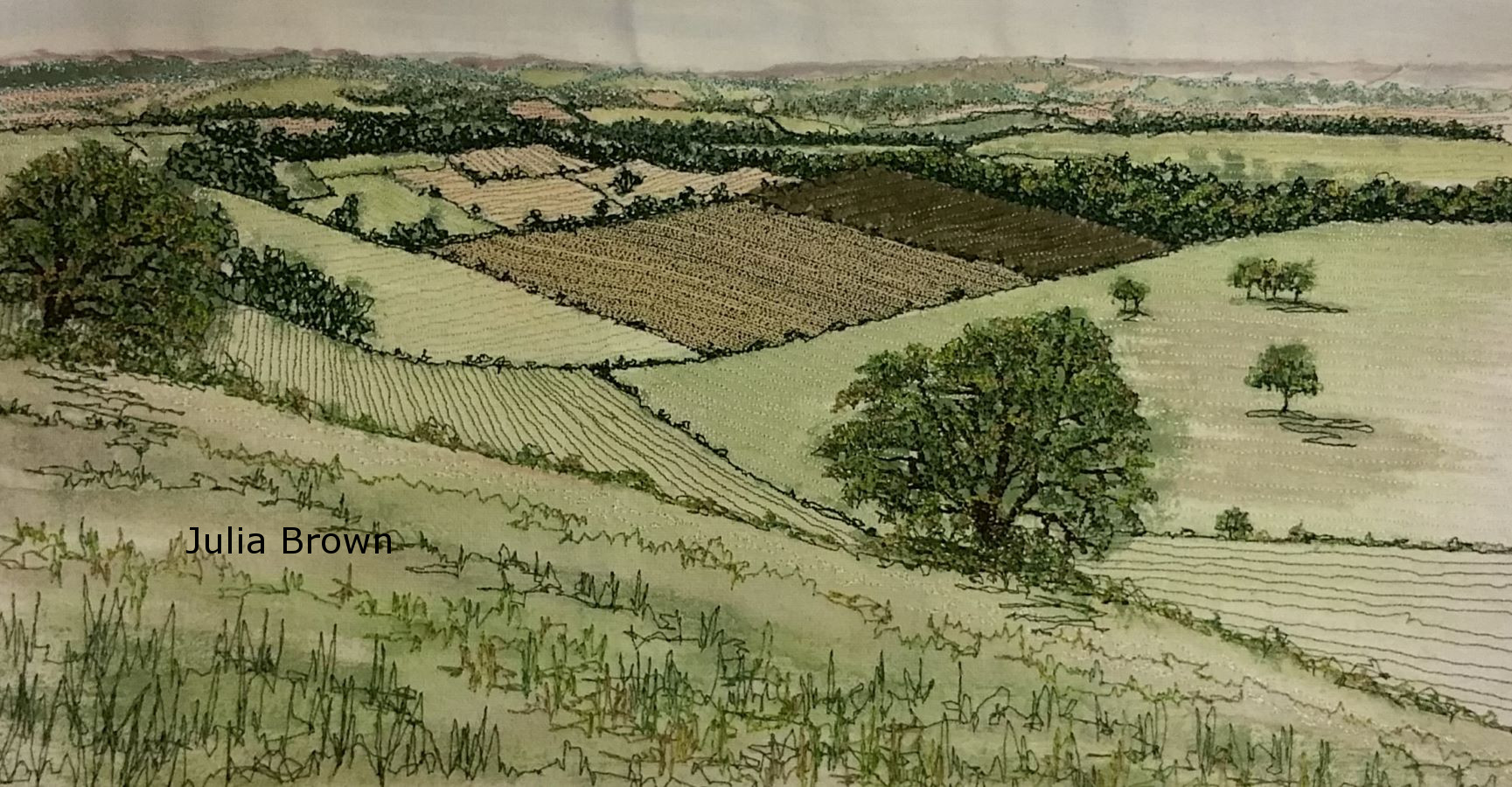 We had a wonderful machine embroidery workshop with Lara Sparks this month. Like the rest of the group I was very happily absorbed all day, and I would describe the day as one of the best workshops I’ve been to for a long time.

Lara had brought pre-printed designs as well as stencils and cut-outs, so for those who don’t like drawing it was possible to get immediately into stitching without worrying about design. Lara also encouraged people to use their own designs if they wanted to, and helped with the details. Many people used some of Lara’s stencils but added their own interpretation, which meant that each one came out completely different.

There are a few photos showing our concentration during the day. There was a positive response to using the Maybridge Centre for this workshop; people commented on how nice it is to work somewhere with plenty of space and good light – it makes so much difference to how the day feels. Scroll further down to see some examples of the work that was produced. 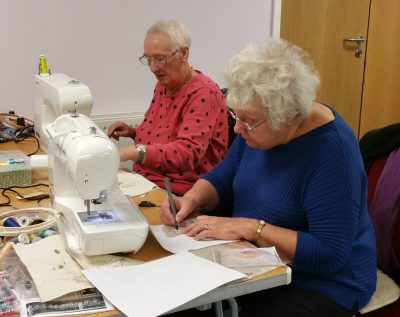 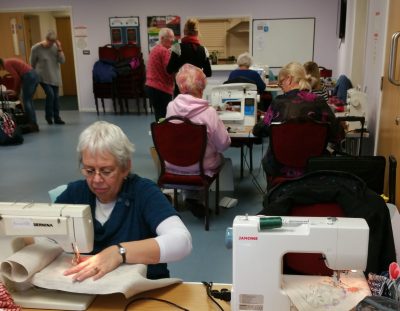 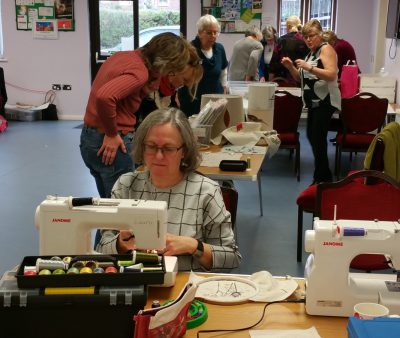 Here’s some of our work below (bear in mind that these are unfinished and un-ironed). Do send me a photo if I missed photographing your work and if you’d like to include it here; and it would be good to see some photos of any finished pieces as we’d love to see how they turned out. 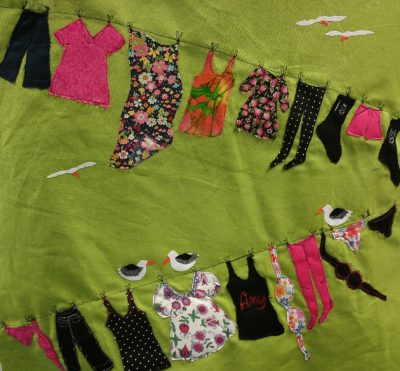 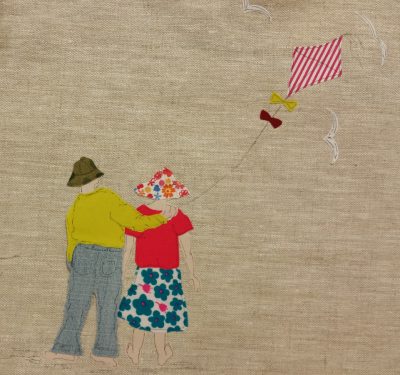 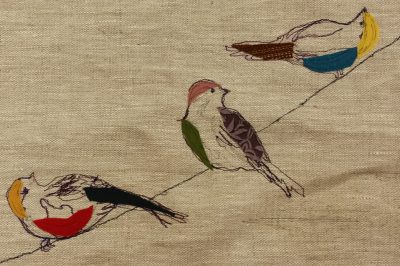 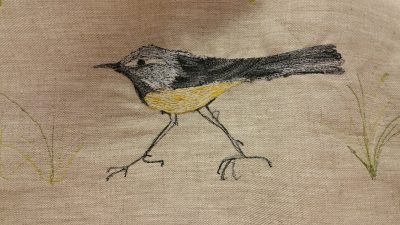 And here are two finished ones, both from Lesley Payne. 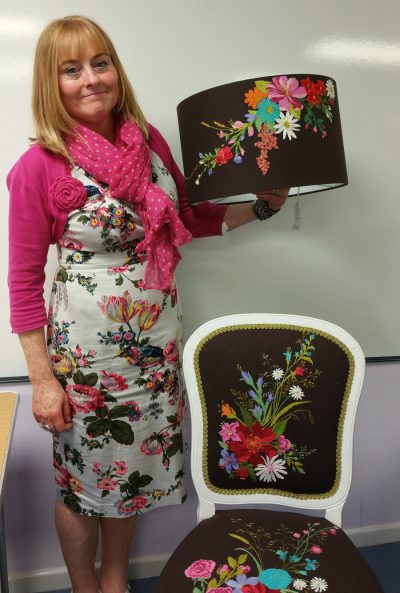 What a delightful afternoon for our June meeting, listening to a talk by Lara Sparks.  Judging by the numbers of questions and the throng round Lara’s display table, Lara’s talk was enjoyed very much by members.

Lara told us about a world that most of us know next to nothing about, which is the world of embroidery designers working in the fashion industry. Lara worked in various roles, for example designing and providing the prototypes of embroidery designs for high-end fashion houses making wedding dresses. 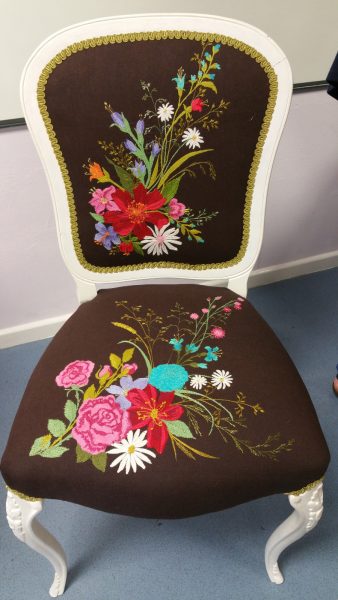 She recounted one disaster when, after two weeks of stitching the embellishment on a very expensive wedding dress, the sewing machine had a hissy fit and sputtered oil onto the white silk. Oops. Then Lara had a stint of doing embroidery designs for women’s and men’s fashions, as well as designing for children’s clothing. Now she works on embroidered cushions, lampshades and home furnishings and exhibits with the Sussex Guild of Craftsmen (the next exhibition is this coming weekend, Sat 16th-Sun 17th at Parham House).

The drawing and design skills learnt during Lara’s art-college training have stood her in good stead. At one stage she was having to come up with one, sometimes two designs per day, not only drawn but also stitched.

See some of Lara’s work below here, with kind permission by Lara to include images of her work on our website. There is great enthusiasm to invite Lara to run a workshop for the branch.  If a date is arranged for this, then Ann will let everyone know in the newsletter. To see more of Lara’s work, go to her website: http://www.larasparks-embroidery.co.uk/ 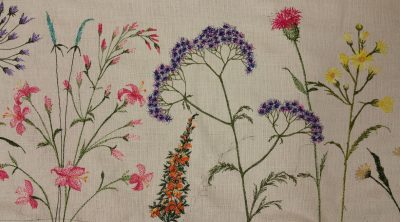 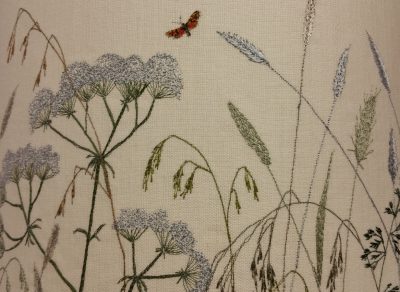 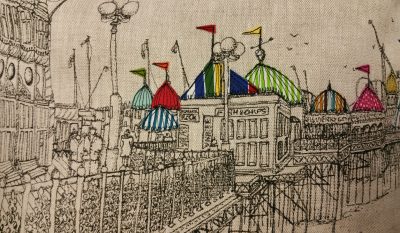 Look at this gorgeousness that was made by Lea Dishott on the recent workshop with Isobel Moore. The workshop was machine embroidered swirls, using fabric, printed paper with a light colour-wash, ribbons, braids and bits and bobs. Wonderful. It sounds like a fabulous workshop that was really enjoyed by everyone. If anyone else would like to send me a photo of your work from the workshop then it would be good to see some more. 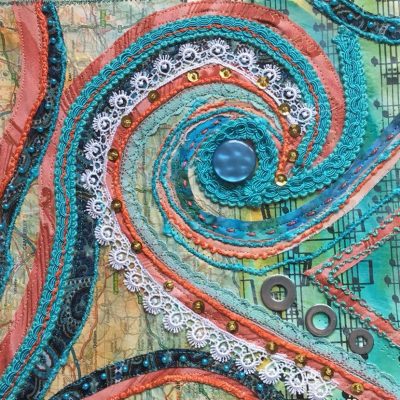 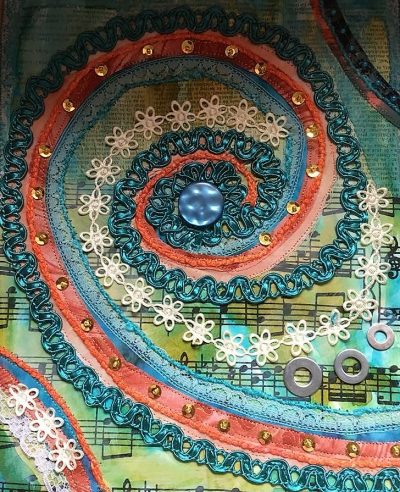 Here are some more ‘works in progress’ from the day. It would be lovely to show some of the finished pieces if anyone would like to send them in. 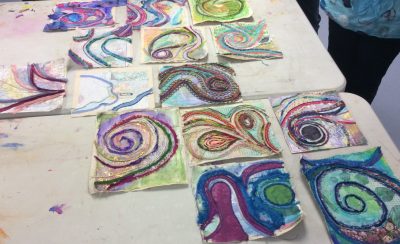 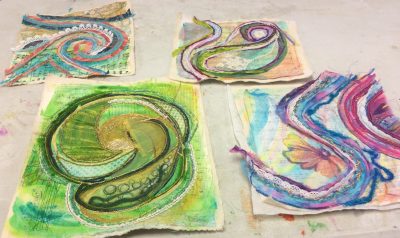 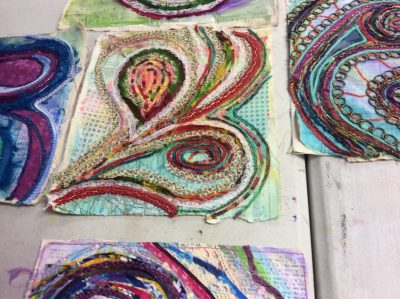 At our March meeting, members enjoyed a fantastic talk by Isobel Moore, who shared some of her wonderful machine-embroidered textile art with us. Her work (and her talk) were so well-liked that the forthcoming workshop on the 26th April booked up almost immediately. Don’t despair though, if you go on the waiting list then you may just squeeze in if there’s a cancellation.

A passion for colour

Carol Naylor was our inspiring speaker this month. Carol started by surprising us when she said that[Read]

If you are free on Thursday, Friday or Saturday, I recommend this exhibition at Colonnade House (ope[Read]

The secret is out: SCS member Gay Hibbs is a yarn-bomber! This one is in Findon village.  [Read]