November’s meeting was a delightful change for us. We heard a talk by Isabelle Lewis; she has an interest in stitch and applique, but her training is in graphic design and she has found her own niche in cut-card silhouettes. This was something new for us as a group, and members were intrigued by her work.

There are so many potential cross-overs between Isabelle’s cut-work, and our own work in stitch and applique. The talk reminded us that although our common-ground as a group is stitch, there is also a wide range of other interests amongst the group. There was lively interest from the many members present, and a good stream of questions.

Isabelle was introduced to us by member Alison Crosthwaite, who has known Isabelle for many years. Alison explained that Isabelle did the graphic design for her book Fibrefrenzi Artweave, (with marvellous results – on sale directly from Alison).

To see more of Isabelle’s work, go to her website at http://artizaza.com/

In many organisations, the AGM is often a time when people discover some other pressing engagement that prevents them from attending; and when it comes to committee nominations people are seen intently studying the floor and pretending they’re not there. So it feels very positive that our branch had an excellent turnout for this year’s AGM, and that there is no shortage of people willing to serve on the committee. As well as the current committee all being willing to be re-elected, there were new nominations too, so we are all set for another healthy year ahead. Gay has been busy working on the new programme and there are some exciting things coming in the new year (this will all be added to the website, and your printed programme will be given out soon.)

Members of the  monthly Workshop Group and the  monthly Traditional Group put on an exhibition of work that has been completed during the year. There was a lovely show of zippy bags, tuffets and boxes, and there were several of the wonderful ‘necessaires’ that were stitched from a traditional design introduced to the group by Cobi. One of the strengths of our branch is the sharing of skills and interests.

No doubt one reason for the good turnout for the AGM was a talk by Viviane Proyer on the history of the Embroiders Guild, and a ‘show and tell’ of historic embroideries. Viviane reminded members that preservation of the collection is the main reason why we pay the additional part of our membership fee to the National Embroiderers Guild, so that the special pieces are properly curated and cared for. She showed photos of some of the most precious pieces of the collection and spoke about their history, as well as bringing out the ‘handling collection’ that can be borrowed from the Guild. Thanks for a great talk Viviane. This is probably a good time to mention that in next year’s programme, Gay has organised a talk by Gerry Connelly, Textiles Curator at Worthing Museum. 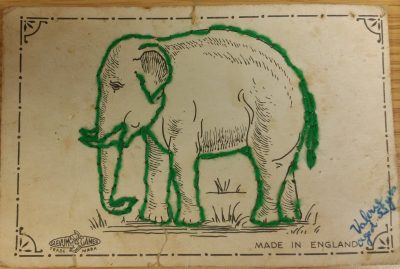 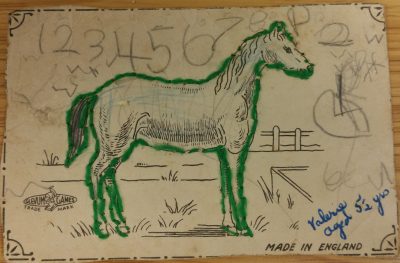 Anne came up with the suggestion that members bring along any historic embroideries of their own that they may want to show members.  Pride of place goes to these two child’s ‘stitch cards’ that were shown by Val, with the inscription ‘Valerie aged 5 and a half years’.  The horse picture even has numbers written on it, which suggests that our treasurer was good with numbers even aged five and a half! 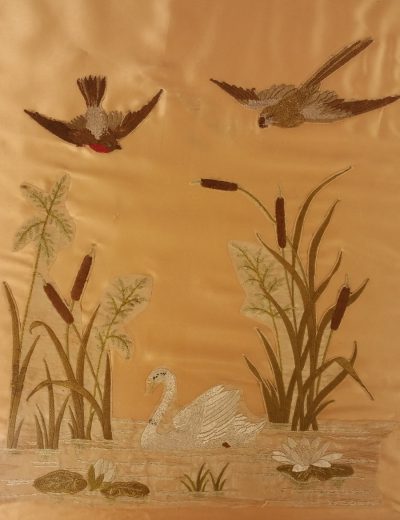 Val also brought in this embroidery of swans, birds and bullrushes. The history behind the piece is that it was stitched by her grandfather when he was on fire-watch duty in London during the war. The background fabric that it was stitched on had decayed over the years, so it has been cut out and re-mounted onto a new silk backing in order to preserve it.

Here are some others: